skip to main | skip to sidebar

Jaime Oliver's Food Revolution! Start With Your Own Family!! WATCH THIS!

Video - How To Make Matzoh Balls on Epicurious.com

Posted by LAMommies.com at 6:35 PM No comments:

This was on yesterday. I never knew Martha is REALLY into Matzo Ball Soup. This seams like a really Simple recipe. Chef Maws reiterated that when forming the matzo balls, don't roll and condense like a meatball. You want your balls to be light and fluffy :) 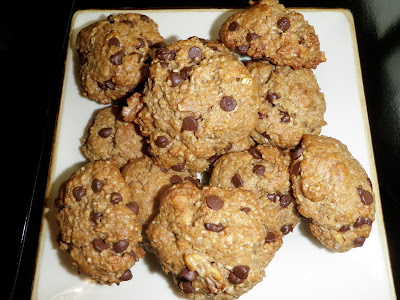 These turned out surprisingly well. My 3 year old will not eat nuts on their own nor will he eat oatmeal, ok...sometimes a little oatmeal...but not enough. I have found he will pretty much consume any nut if it is in the form of a cookie or cupcake. It also REALLY helps if the baked item has some mouthwatering, very visible, chocolate chips. I might add, I love the mini chocolate chips as well...helps to balance a "TOO HEALTHY" recipe in my opinion. :):)
BTW ~ My family is used to eating like this so I brought some of these to a dinner party,..... to "Test" them out... and everyone loved them. ( I was a little nervous....)
I got the original recipe from the WholeGrainGourmet.com. I made a few changes. :)
Thank you Whole Grain Gourmet for helping to keep my family healthy!!

Dry ingredients
1 cup whole wheat flour (a pinch more depending on the moisture of the mix) (I used Whole Wheat Pastry Flour - (Whole Foods)
1 1/2 cups of steel cut oats (Trader Joe's)
1/2 tsp baking soda
1/2 tsp baking powder
1/2 tsp salt
2 Tbsp Cinnamon (To your liking - 1-3 T)
1/2 tsp Nutmeg (optional) - (I would not add this next time...not a big fan)
1 Stevia packet (Trader Joe's)
Wet ingredients
1/4 cup honey
1/4 cup agave
1/2 cup oil (corn, grapeseed or olive) * you can also use some applesauce to replace some of the oil if you wish* (I used EVOO)
1 Tablespoon Molasses (Whole Foods)
1 egg (beat with 1 Tbsp Water)
1 tsp Vanilla
Yummy ingredients
1/2 cup raisins (I didn't use these)
1/2 cup walnuts
Couple handfuls of mini chocolate chips
Preparation:
~In a large bowl, mix all the dry ingredients together.
~In a medium bowl, mix all the wet ingredients together. Hint: when measuring out the honey, spray the measuring cup with oil or baking spray--your honey won't stick).
~Mix the wet stuff with the dry stuff. Add the raisins and walnuts and mix. If the mixture seems too wet, add a bit of flour (shhh...don't tell anyone,...I added "a little" white flour.) If it isn't binding together very well, you may wish to add an egg white.
~COOL the mix for 20 minutes or more in the fridge. (This is a MUST!! or everything will crumble)
~Preheat the oven to 335 degrees (lower temperature due to the honey in the recipe which will burn more easily).
~Drop by teaspoonfuls onto your baking sheet (I recommend lining the baking sheet with parchment paper). Press down with a fork to ensure even cooking. (I rolled them into balls)
Bake for about 15 - 20 minutes or until golden on the bottom of the cookie. The cookies freeze very well and make a great snack! Enjoy.

Real Grill Cheese sandwich on Whole Wheat bread with yogurt for $3.65...great deal!
Posted by LAMommies.com at 10:39 PM No comments:

She looks AMAZING!! I can't wait to see her on Dancing With The Stars!! It looks like she is really happy. No matter who was right or wrong between her and Jon, it's the 8 kids and their happiness now. She looks great, hopefully she feels great, and good happy energy is being passed on to the kids. I really admire her going for it. :) Being a Mom of 1 is tough,...can't imagine 8??!!!

Check out pics at : POPEATER.com
Posted by LAMommies.com at 10:29 PM No comments:

We were JUST near this restaurant at the Santa Monica Airport. We didn't eat there but this is right where the you can sit with your kids and watch the planes come and go. I can't believe they were just caught serving Sei Whale, an endangered species, as sushi by an undercover diner. THIS IS HORRIBLE!! How could people do this?


Video of their meal shows the two activists, both vegan, being served what the waitress can be heard calling “whale” — thick pink slices — that they take squeamish bites of before tossing into a Ziploc bag in a purse.

The samples were sent to Scott Baker, associate director of the Marine Mammal Institute at Oregon State University. Professor Baker said DNA testing there revealed that the samples sent to him were from a Sei whale, which are found worldwide and are endangered but are sometimes hunted in the North Pacific under a controversial Japanese scientific program. “I’ve been doing this for years,” Professor Baker said. “I was pretty shocked.”

Serving unusual fish imported from Japan is the hallmark of many high-end sushi restaurants here, and whale meat is often found in Japanese markets, Professor Baker said. But he said he had never heard of it being served in an American restaurant.

Workers at the Hump, which according to its Web site is named after an aviation slang term for the Himalayas, directed questions to a lawyer.

“We’re going to look into the allegations and try to determine what is true,” said the lawyer, Gary Lincenberg, in a telephone interview. “Until we have done that, I don’t have any other comment.”

Professor Baker contacted the National Oceanic and Atmospheric Administration, a marine conservation unit of the Department of Commerce, which began its own investigation, eventually looping in the United States attorney in Los Angeles.

Mr. Psihoyos’s team — a far-flung band of activists who use film making to highlight environmental causes — knew they would be together in Los Angeles for the Oscars, and so sting operations two and three were hatched. On Feb. 28, team members split up between the sushi bar and a restaurant table and ordered sushi and communicated via text message with Mr. Psihoyos, who waited in a car in the parking lot. Mr. Psihoyos served as an electronic envoy between the investigators at the sushi bar, who were witnessing the chopping of fish and whale, and those sitting at a table:

“They’re eating blowfish!” read one of the text messages. “Toro and sea urchin, nothing exciting,” another said. “Whale coming now!”

Next waiters identified a meaty course of whale, referring to it at times by its Japanese name, kujira, at a cost of $60, according to a federal affidavit. (The total bill exceeded $600 for two, with very little sake.)

Last week, several federal agents, including one from the Border Patrol and one who speaks Japanese, joined their team. Once again, the chef and wait staff more than once identified the meat as whale, the affidavit said, and it may have been obtained from a Mercedes parked behind the restaurant.

Armed with a search warrant, federal officials on Friday went searching for evidence from the restaurant, including marine mammal parts as well as various records and documents. The possession or sale of marine mammals is a violation of the Marine Mammal Protection Act, and can lead to a year in prison and a fine of $20,000.

Mr. Psihoyos, a former photojournalist who heads a nonprofit through which he makes his films, said that environmental action is more motivating to him than awards.

“Once you become sensitized to these animals you want to save them,” he said over breakfast Monday, still bleary from his big Oscar night.
Posted by LAMommies.com at 10:00 PM No comments:

How Did You Get PREGNANT??

When a parent brings a sick child to play group you:

When a child comes to play group or activity sick you:

How Often Do You Have Sex??

Are You Giving Your Child the H1N1 Vaccine This Year?

Are You Giving Your Child the Flu Vaccine This Year?

Promote Your Page Too

Parks That Are Gated

Outdoor Fun for you and the kids

Mom Websites - (We're all in it together)